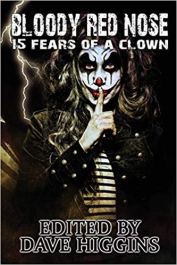 As opposed to David Higgins’ experience in his intro for this anthology, I don’t think I ever had clowns for any birthday parties. None that I can remember, anyway. Mostly we just saw the clowns in parades, or at the circus. I grew up in Sarasota, Florida—the winter headquarters for a certain notable circus. But I don’t remember any real fear of them, or any real love of them, either. I liked the animal acts and I can still remember the smell of the elephants as mixed with the smells of the Big Top. These fond memories sit uneasily with my later (and continued) dedication to animal rights causes.

But I love stories about clowns. And of course I read Stephen King’s It when I was in middle school, and remembered feeling a little disappointed in the movie, despite Tim Curry’s appearance in the film.

So I was so excited when David Higgins put out this anthology (I haven’t read the other clown anthology he put out, so please no spoilers! I’m just as keen to read that one, as budget allows.)

And for more than just that my own story appeared in it. Having the clowns be, as the back cover blurb puts it “the victims or heroes of the story” made the collection even more appealing.

I’ll just do a quick summation of each tale, and leave you to discover the chills and spooks for yourself. (Although, there might be some slight spoilage going on, so maybe just go out and buy the book before you read on!)

Eleanor Cawood Jones writes the kind of tale I love to read; plus I (half-shamefully) giggled through the capers of Kipper the clown almost to the very end of the story.

Ben Fitts (Rock N’ Roll Horror Zine) kept up the laughs with “Naughty,” though at times I was probably more closer to crying, given that I work in the school system on a daily basis. The naughty children Poodles faced were wonderfully real in their description. Hence the half laughter/half crying sensation I felt while reading his delightfully dark tale.

It’s perfect that Fitts’ “Naughty,” is followed up by Casey Douglass’ “Life of the Party” where the tables are horrifically turned once again, against some not-so-naughty partygoers.

Simon Peterson’s “The Killer Clown Massacre” really hit the horror spot for me, as the violence in the story mirrored the typical violence that unfolds in the state of Florida.

“Freckles” by Kathleen Palm, “Beneath Black Balloons” by Jeremy Megargee, “Fear the Clown” by Ray Kolb, and “Corn Stalker” by Dan Allen help descend the book into that sort of darkness I love…like sipping a rich horror scotch.

The poignant tales “I, Clown” (Robert Morgan Fisher), “Replevin” (Misha Burnett), and “The Distinguished Gentleman” (M. Kelly Peach), and “Clowns on the Run” (Daniel Scott White) made my heart break as well as speed up. One of them was even kinda romantic (I’ll not tell you which one, though…).

Gord Sellar’s “Alone with Gandhari”—goodness gracious, I don’t think I’ve ever read a tale quite like that (in a good way). I definitely have to check out the Korean speculative fiction he and Jihyun Park have co-translated, and, as a fan of Korean cinema, especially horror, I really want to see The Music of Jo Hyeja (he wrote the screenplay for it).

Trying to pick a favourite from any sort of written story is nearly impossible for me, but the one that really got to me was “Bingo” by Andreas Hort. Bingo the misfit who finally found his place in the world and held onto that dream no matter what the consequences.

David Higgins has done a great job in not only selecting the tales for this anthology, but also placed them in just the right order, which made it a fantastic read!

I hope to be able to purchase Deadman Humour: Thirteen Fears of a Clown (Another clown anthology edited by David Higgins) very soon!

All photos and written content (prose, poetry, articles, short stories, etc.), unless otherwise specified, are the creative property of Willow Croft. Please do not use or reproduce ANY of the materials without express written consent from Willow Croft or other individuals whose work is shared on this blog. Thank you! © Willow Croft 2022
Jennifer Powers Blog
E.B. Hunter Author

Smile! You’re at the best WordPress.com site ever

Not just a blog, a philosophy

All about that green nature.

Witchin' My Way: Shining in the Dark

My Journey down the rabbit hole with the Gods: Hekate and Loki (& others who occasionally pop in!)

Learning is knowledge transfer to brain known as learnography