Anybody else out there just want to go curl up in bed and go back to sleep?

Maybe you’re already well on your way into the deep blue sea of Dreamland.

It’s a deep blue day over here in the Willow realm, and yet not quite blue enough.

We had a record-setting snowfall here in Wichita, but the snow is already all melted, so it’s not the blue-frost day I keep expecting to see when I look out my window.

Being a writer/creative type, I can sometimes feel another world right alongside this one, but I don’t have the magic password or a magic wardrobe to get there. But it’s there all the same, and it’s quite the teaser sometimes. Magical and real, but not magical enough to actually become real.

But in the book with the blue cover I read last week, the world of magic or just otherworldliness becomes accessible from the “real” world. 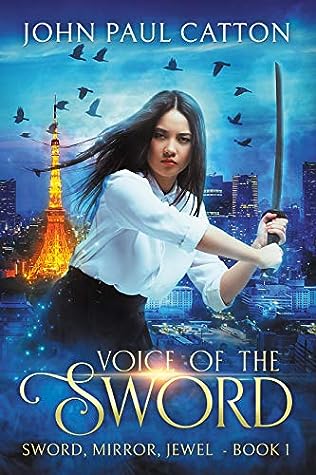 I’m trying to avoid comparing it to a certain other book that features a young wizard (who, honestly, I might not have liked so much as the books went on if it hadn’t been for his amazing circle of friends), but Voice of the Sword: Book One by John Paul Catton did have a similar sense of magic within its pages.

I’ve read so much in my life—history, world religions, classics, fiction, horror, et al–that I sometimes feel like there’s a “been there, done that” familiarity to everything.

And there’s a certain comfort to that, because it makes Hogwarts School of Witchcraft and Wizardry feel like it could be real because of that literary-obtained familiarity.

I didn’t think I was as uninformed about Japanese culture and mythology as I actually (embarrassing as it is to admit!) am.

But, because of that, this book was even more of a novel, exciting read. I had the chance to leave my jaded-reader persona behind and fully immerse myself into the adventurous quest right alongside of the main character Reiko Bergman. And getting schooled about Japanese mythology and culture during the book’s quest was even more of a perk!

So, if you want to escape from this world for a while, you can add it to your “to-read” list here:

What books have taken you out of this world lately? Share below…

All photos and written content (prose, poetry, articles, short stories, etc.), unless otherwise specified, are the creative property of Willow Croft. Please do not use or reproduce ANY of the materials without express written consent from Willow Croft or other individuals whose work is shared on this blog. Thank you! © Willow Croft 2020

Frugal Living Tips & DIY's From My House to Yours

Life past, present, thoughts about the future, and ever changing world

From the Farther Trees

A Magazine of Fantasy

Stream thru the bluest oceans, waterways, and coastal beaches with Mermaid (TIB) @followthisfish

She reads books as one would breathe air, to fill up and live. -Annie Dillard

Walking with the Goddess

a collection of flash fiction, micro fiction, and musings by Jeff Gard