I’ve adopted sixteen animals over the years. Since I’ve moved to New Mexico, I’ve rescued at least six cats and one dog, and take care of two feral cats that had been abandoned (they’ve been TNR’d–trap-neuter-release). I also rescued an abused and abandoned cat that showed up on my doorstep and socialized her. It’s been a year, and she’s now a happy, bright lap kitty, though she still has some trauma-based quirks and can’t be adopted by a member of the gen pop. I call her Moon Pie, because she’s a rambunctious goofball.

Moon Pie before I trapped her and got her spayed and seen by a vet. 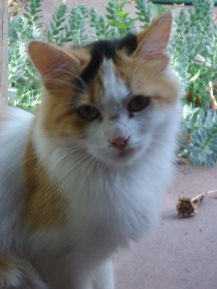 So many lovely, adoptable animals languish in shelters, waiting for their forever homes. And, sadly, for many of these unwanted and abandoned animals, that loving home will never come.

While I strongly support no-kill shelters, the grim fact remains: there are just not enough willing adopters to take in all the animals. And the day comes when the difficult and heart-wrenching decision has to be made on which animal(s) has to be euthanized.

At people who just have to have the latest designer pet.

Those who buy breed over shelter animals.

Those who don’t want their pet when the trend fades, or when they don’t feel like taking care of their status-symbol pet any longer. And that pet gets taken to a shelter. where at least it has food, clean water, and is safe, warm, and is looked after for with the best possible care.

There are much crueler fates. That pet could be dumped on the street, where it has to fend for itself. Or left behind in an apartment or house, where sometimes nobody even realizes it’s there until it’s too late.

And don’t get me started on puppy mills. Or people who leave their dog chained outside 24/7, 365 days a year.

Or those who cruise neighbourhoods (or free pet listings) and take people’s pets to use as bait animals in dog fights, or sell them to laboratories for animal testing purposes.

So, please, spay or neuter your pet. Don’t buy breed. Of course, don’t buy an animal from a puppy mill. Keep your cat indoor-only–it’s better for them and for wildlife. Don’t chain your dog. Don’t let your dog run wild and/or unsupervised, especially if you live in a more urban area.

And please, PLEASE, adopt don’t shop. Visit Petfinder.com to search for shelters/adoptable pets near you. #AdoptDontShop

All photos and written content (prose, poetry, articles, short stories, etc.), unless otherwise specified, are the creative property of Willow Croft. Please do not use or reproduce ANY of the materials without express written consent from Willow Croft or other individuals whose work is shared on this blog. Thank you! © Willow Croft 2019

wake up and smell the humans

One minute One book

Search about me -Books

my life and imagination

ruminations & travesties of the favorite yet naughty son of Nengkoy

Bringing you the very best in horror fiction