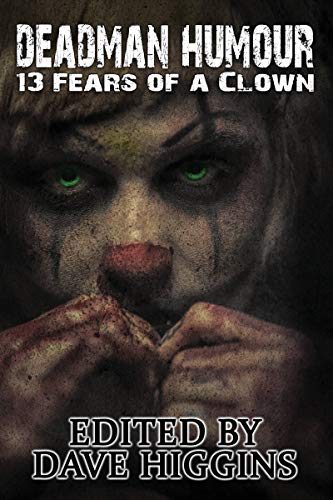 Deadman Humour: 13 Fears of a Clown is another clown anthology published by Dave Higgins that is bursting with, what else, clowns.

It’s easier for me to break down the review by focusing on each of the individual stories, rather than review the collection as a whole. (Which I loved just as much as the companion short story collection Dave Higgins has published—Bloody Red Nose: 15 Fears of a Clown.)

This collection was aimed at tickling the reader’s funny bone with more stories that made clowns not the objects of fear, but the victims of things more comically terrifying than they are.

R.M. Mizia’s “The Living Dark” sets the stage with a birthday party celebration that sounds like one I should like to attend, but which doesn’t bode well for the clowns hired to entertain at the event.

“The Clown” by Henry Snider captures the simultaneously alluring yet seedy feel of the fairway in his story, which serves up a haunting twist at the end that stays with the reader.

Like the companion anthology, Deadman Humour offers an immersive darkness that gives me a chance to escape the darkness in my own life. And it works because it’s darkness with heart and longing and emotion. Such is the case of Steven Pirie’s “To Pull a Child From a Woman” definitely has both darkness and heart, and has an ending for Hobo the clown that I almost envy. (Oh, the poor emus, though…).

The poignant telling of the funeral services of King Giggles the clown in Donna J.W. Munro’s “Funeral for King Giggles” is both touching and fitting reminder that when, despite the evolution one would expect from the 21st century society, it remains a world where many still have to wear masks. I loved the acceptance and the passage of self at the end of the story.

“Auguste in Spring” by Christopher Stanley for me, alludes to the clown version of the #MeToo movement, where a young clown starlet turns the tables on a sleazy director who is expecting sexual favours in return for his making her a star. On the night of her eighteenth birthday, she begins to transform into something much less alluring (by clown performer standards, apparently) yet invariably more powerful, and it’s then that the young starlet comes into her own.

“Giggles for Bimbo” by N.D. Coley is horror that uses a man who is impressed into clownship to create a story that examines the actual nature of children, raised by a society that emphasizes power, control, conformity, and intolerance. It’s a heartbreaking commentary of what we do to children who are sensitive in a world of cruel callousness and demanding expectations that are nearly impossible to live up to—a world that does not encourage gentleness of spirit and richness of soul and feeling in children of any age. This is a horror story that, again, stays with the reader after it’s over.

Having grown up in a theatrical environment, the next two tales sit very close to home with their depictions of horror on the page. Both Roger Jackson’s “Being Funny Is a Serious Business” and Christopher Degni’s “A Mime Is a Terrible Thing to Waste” are evocative in the reminders that there is no price too high, and no sacrifice too great, in the practice of one’s craft.

Lee Greenwright’s “You Don’t Choose the Circus Life, the Circus Life Chooses You” takes this dedication to craft to a whole other horrific level. The story lures you in with what many of us may want: finding the place where we belong, the chance to be part of a family, to find our “home” as the author puts it via his main character Varley. Greenwright, though, reminds us to be careful what we wish for. (I’m still going to wish for my own place that I belong; my home, despite the cautionary tale Greenwright has offered, here in this collection.)

Samantha Bryant’s delightfully crafted tale, “The Gleewoman of Preservation,” had a lot more to offer than a barrel of chuckles. I loved that she wrote the story around an older couple, I loved her inclusion of more real-life based bits of what life for a retired couple was life (the bit about her husband’s snoring was truly mirth-inducing), and I loved even more how she turned the male-dominated “Gentlemen’s Club” into the 21st century, with a truly speculative twist. I can’t wait to read more from Samantha Bryant. (My grandfather was a Shriner, incidentally.)

The dark giggles take on a whole other hue in Charles Bernard’s “auguste” tale. It’s a story that doesn’t paint over the secret life of clowns with any sort of romantic gloss. (I’ve learned, now, that “Auguste” clowns are “red clowns” in contrast to the clowns wearing white facepaint and white costumes.) And the final, violent end to one clown’s loneliness—well, that just makes the bitter, blood-drenched end of the story that much more powerful.

I also loved the dark humour in Joshua R. Smith’s “Bag of Tricks,” aka “The Inner Life of People Who Are Forced to Work With Kids.” Lots of giggles to be had at this author’s too-close-to-home depiction of kids—and their parents! It’s stories like this that I love, because I am granted permission to laugh at realistic depictions of children in ways that I don’t have the freedom to at the day job.

Then, the anthology fittingly wraps up with G.K. Lomax’s story titled “Alas, Poor Yorick.” Again, I practically grew up in a theatre, so I couldn’t avoid knowing the gist of Hamlet’s tale via osmosis even if I wanted to avoid it. This tale is a skilled expansion of the clown(s) behind the scenes of Shakespeare’s notable dramatic play. Even though I’m not a trained thespian or a Shakespeare scholar, I thought this tale was really well done, and provided a delightful finish to the anthology. Like the rest of the authors I’ve been introduced to by way of this anthology, I’m looking forward to reading more tales of his in the future.

Explore the inner trials and tribulations of clowns for yourself with your own copy:

11 thoughts on “Polka-Dot Sized Reviews of Deadman Humour: 13 Fears of a Clown”

All photos and written content (prose, poetry, articles, short stories, etc.), unless otherwise specified, are the creative property of Willow Croft. Please do not use or reproduce ANY of the materials without express written consent from Willow Croft or other individuals whose work is shared on this blog. Thank you! © Willow Croft 2022
stevestredauthor

Art and the philosophy of life

I love to read, and I love to write book reviews and share them with others.

Jarrett June Stony Point NY
Asia 4 Ever 2
Voices of the past, present and future

Happiness Between Tails by da-AL

A blog with an Indian prespective